This is a work-in-progress by Barbara Slate. You can read all the draft pages here. The two volume printed edition is now available. Orderin...

This is a work-in-progress by Barbara Slate. You can read all the draft pages here. The two volume printed edition is now available. Ordering info is in the sidebar, or go to

Barbara Slate posted the first page on Facebook and Twitter April 21, 2019, three days after the redacted report was released. The response was so fast, large, and enthusiastic, she created and posted a page a day until it was done.
Follow Barbara on Twitter
Like the Mueller Report Graphic Novel page on Facebook! 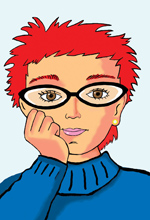 About the Author
Barbara Slate created Ms. Liz, a feminist cartoon character, in 1976. Ms. Liz comic strip ran in Cosmopolitan and was an animated segment on NBC’s TODAY show for two seasons. Barbara has written hundreds of comic books and graphic novels for DC, Marvel, Archie, Disney: Barbie, Beauty and the Beast, Pocahontas, Betty and Veronica, and created Angel Love, Yuppies from Hell, Sweet XVI, Getting Married and other Mistakes. She is profiled in A Century of Women Cartoonists. Author of You Can Do A Graphic Novel. A resident of Stockport, NY, she travels extensively nationwide as a keynote speaker, teacher, and moderator.
http://barbaraslate.com
at May 19, 2019

"A surprisingly good-natured but thorough adaptation of what may turn out to be the most astounding story of American corruption in plain sight ever told."

"This is a comic that needed to be done now rather than later."

"Slate has provided something that is half-public service, half-wild ride, both crucial and rollicking."

Read the review by John Seven in Comics Beat

Read the article by Rachel Kramer Bussel in Forbes

Get the New Combined Edition direct from the publisher.